Mother nature decided that the Rampage zone needed some rain and as a result the Red Bull Rampage qualifying round #2 slated for Friday-Saturday was delayed. They were able to finish qualifying today however and Graham Agassiz came out on top. Finals are live tomorrow! Details inside.

Virgin, UT – September 28, 2014 – After two days that saw lightning strikes, inches of rain, flash floods and piles of mud, the qualifiers were completed on Sunday with 10 riders earning their spot in the main event, which has been moved to Monday. The anticipation for the first official competition on the new Red Bull Rampage course did not disappoint, as 23 of the top mountain bikers in the world made use of every inch of the mountain as they tricked their way into the big show.

Graham Agassiz made the most of his chance to ride as the weather cleared, stunning the crowd with his run that included one of the biggest drops in the history of Rampage, estimated at least 76 feet. As soon as he made it to the finish he was surrounded by his peers who had no doubt his run was the best they had seen. The scores from today’s run were a continuation of Friday’s first round of qualifying that saw it’s own jaw-dropping moments including Szymon Godziek’s backflip over the 73’ canyon gap and Brett Rheeder charging down the knife-edge ridges. The second heat was postposed as heavy rain and lightning flashed across the venue. The severe weather continued through Saturday, and finally cleared on Sunday to allow for the athletes to complete every run of the second heat – and riders like Agassiz and Paul Basagoitia certainly were glad for the sunshine. Bas’ second run bumped him into 5th place, joining others such as Brett Rheeder, Tom Van Steenbergen and Jeff Herbertson in spots to move on to tomorrow’s final.

There is no doubt that all the talk will be about Agassiz, who had to wait two days to make up for a wash out on his first run. “It was so much build up, I was stressed because of the weather and praying for sun. I knew this was my once chance to make it into the finals and I just had to make it happen.” His huge score of 94.0 will be hard for to top tomorrow but he says he has some plans in store, so he will be one fans won’t want to miss in the Final. Fellow rider and announcer (out due to injury) Tyler McCaul agrees, “He did not hold back at all. I’ve always said it’s just a matter of time before he wins something like this and I think this is his year.”

CASE OF THE MONDAYS JUST GOT SWEETER
Today’s action was just a preview for Monday, where 20 riders will launch out of the start gate for the main event, delayed 24 hours from the storms. Expect to see riders fly across huge step-downs and mega booters in addition to steep vertical lines down the exposed terrain. The riders from today will join the likes of former Rampage champions such as Kyle Strait, Brandon Semenuk and Cam Zink. 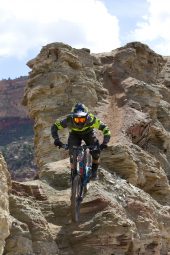 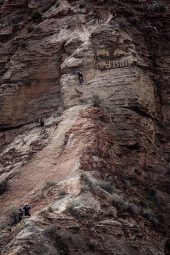 Thanks to the rain, your workday just got a lot more entertaining. On Monday, join fans around the world to tune in as Red Bull Rampage is being webcast live, beginning at 1pm MT (12pm PT/3pm ET) via Red Bull TV at redbull.com/rampage. The enhanced webcast will feature live voting during each run, with a prize being awarded to the Army National Guard People’s Choice. Get involved in the action via live chat with fans around the world, and watch your favorite moments over and over with almost instant online replays for each run. We’re sure your boss won’t mind.

In addition to the online experience, fans can tune in to NBC on December 27th at 4pm EST to broadcast of Red Bull Rampage presented by GoPro, and supported by Dodge Dart, Polaris RZR, Army National Guard and Utah Sports Commission. The show airs as part of the Red Bull Signature Series, the most progressive action sports property in the world, featuring some of Red Bull’s top events including Crashed Ice, Ultra Natural, Wake Open, Dreamline and Joyride. For more information, please visit www.redbullsignatureseries.com.

Be sure to check out the Round #1 Qualifying videos as well to see runs from Rheeder, Van Steenbergen, and more.

In the finals, each rider will get two shots at the course and their best run score counts. Competitors will be judged on style, amplitude, fluidity, and difficulty of line. In addition, the athlete who throws down the most amazing trick during the finals will also be presented with a Red Bull Rampage Best Trick award by the Utah Sports Commission.