Inside we’ve got some details on the new 2015 Transition Bikes including the Giddy Up range as well as some highlights on the 2015 TLD all mountain gear. Check it out inside.

Transition Bikes was tired of all of the various names for bike genres and have come up with a fun way to categorize their bikes.

For 2015, they have the following categories: Down Mountain, Up & Down Mountains, Jumping Mounds of Dirt, Leaping Barriers, and Skidding Fireroads.

The TR500 is a team rider favorite designed to win races, whip big jumps and crush laps at the bike park. Proven geometry with smart adjustment options and the most versatile setup choices on the market make the TR500 the ultimate downhill bike. The rear suspension leverage curve has been refined with years of input from our pro riders, and the geo has proven itself around the world. The TR500 is ready for anything you can throw at it, from gnarly race courses to big senders.

In their “Up & Down” bikes range the bikes feature their new Giddy Up linkage.

Gone is the previous single pivot design and in comes this multi-link setup with a pivot just in front and below the rear dropout. The bikes all can be ridden up or down and each is a little bit different to suit your needs. All completes come with the RockShox Pike.

All Giddy Up Models include

The all new Patrol gives you the control of a downhill bike perfectly balanced with a lively and jumpy personality for a comfortable, efficient and fun ride in almost any trail condition. The Patrol is long and low with a slack 65 degree head angle and big wheelbase for tremendous stability in rowdy terrain. But don’t let the numbers fool you; the short 430mm chainstay and 155mm of active and carefully tuned suspension keep you in touch with the ground and ready to respond at a moment’s notice. With the Patrol you get big mountain confidence with trail bike agility in the same machine.

We wanted to push some very aggressive geometry numbers without creating a bike that rode heavy and sluggish on the trail. The Suppressor geometry is similar to some of the new 160mm+ bikes on the market, but with 155mm of rear travel it won’t feel out of reach for someone that was considering a bike in the 150mm category. In his European race experiences, Lars felt that travel quantity was not holding him back and that less could actually be more, as long as it was correctly tuned. A shorter travel bike can help make up some more time in the pedaling sections and maintain more agility and awareness of the trail. We think we have nailed it on this bike. The Suppressor works with you depending on the trail conditions and how you are choosing lines. The bike rides very lively on the trail with great support in berms and poppy reaction on jumps and small features. But the bike’s stiff chassis, slack head angle and long wheelbase give you a ton of confidence in rough sections and steep terrain. Everything you would want in a long travel trail bike.

We have a long history of bikes that are big on performance but short on travel. Our Bottlerocket was a ground breaking model that helped move the freeride category away from long travel dual crown forks towards modern slopestyle setups. As time went on, we saw a lot of riders using the Bottlerocket as an all around trail bike, something that was fun on jumpy “flow trails” and gave the rider a lot more confidence than a traditional trail bike. The Scout has much of the same feel, but without the added weight. It’s responsive on the trail, ready to manual at any moment and crisp handling like a sports car. The suspension is active and rides high in the travel, so despite having only 125mm of the travel, the Scout is our most capable and confident trail bike ever. Although the Scout shares a lot of its look with the Patrol, and both have similar builds, they each have their own distinct ride feel.

It’s no secret that 27.5 wheels get all the attention these days, but we haven’t forgotten about the big wheel, and we love the way they ride when done correctly. We wanted the Smuggler to give the rider all the benefit of a 29 wheel without any of the negatives. That is a pretty lofty goal, but we think the Smuggler is our best 29er ever. The 29 wheel is awesome for traction, control and confidence, but too much travel or the wrong geo and the bike will feel sluggish on the trail. Many companies run steeper head angles or a shorter wheelbase to add agility, but these are a poor substitute for a proper head angle, weight balance and room to move around on the bike. Our shorter travel frame gives you a direct connection to the ground and super short 435mm chainstay length with stiff rear triangle will make you forget you are on “wagon wheels”. Push the bike into rough, rooty and technical terrain and the big wheels do their work to keep you moving forward and smooth out the trail under you. This bike will go much further than the travel numbers would suggest.

See more at www.transitionbikes.com and more pictures in the gallery.

Troy Lee had some 2015 products on display at Interbike including these Women’s Skyline shorts.

For the men, they had a few 2015 kits on display as well for trail riders to get excited about.

TLD is best known for their paintjobs on helmets. They had American Luca Shaw’s D3 helmet from World’s on hand.

There is more Interbike 2014 coverage on the way. Be sure to see the additional photos in the gallery 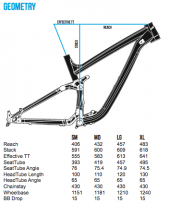 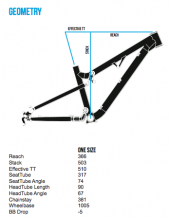 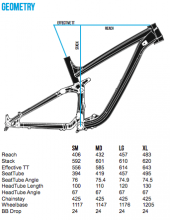 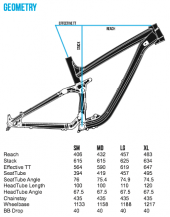 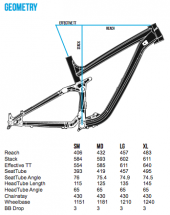 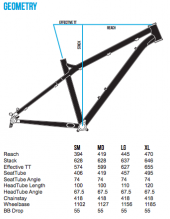 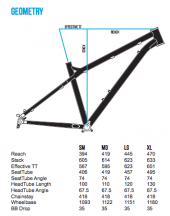 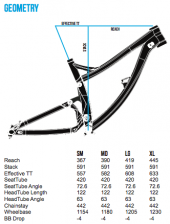 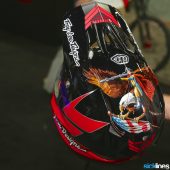 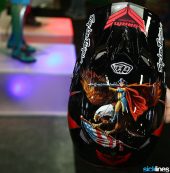 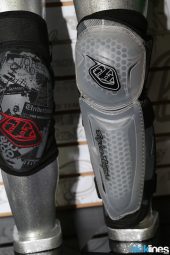 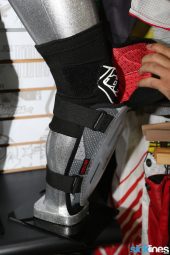 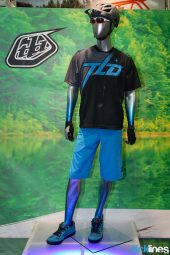 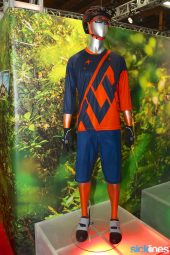 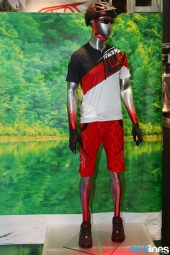 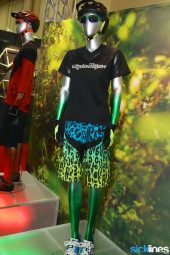