Check inside for some race reports and videos from the Windham World Cup. Learn about how teams like Trek World Racing, Santa Cruz Syndicate, CRC Nuke Proof, and more fared on the fast Windham course.

You can catch more videos and action if you missed it in the Windham finals article.

Josh “Ratboy” Bryceland stormed to the top of the podium once again at UCI Downhill World Cup #6 in Windham (USA) on Saturday, August 9.

His winning margin of 1.581 seconds was a country mile on such a short course. The result marks his third podium and second win of the season, now placing him squarely in the lead overall with 1007 points.

“I’m still in awe that I’m leading the World Cup,” said Bryceland. “I could hear the crowd from the bottom cheering for Gwinny in the finals, so I knew he had had a good run. I put that out of my head and took a few deep breaths, and then gave it everything I had.”

Teammate Greg Minnaar, the reigning World Champion who was recovering from knee surgery earlier in the year, finished in eleventh to consolidate his sixth place in the overall rankings.

“I was refining my bike settings during the week and I felt like I had it dialed in for the qualifier, but I missed getting up to speed in practice.“ explained Greg. “Finishing 11th isn’t acceptable to me” he added, suggesting the best is still to come from the South African this season.

Steve Peat was the first to congratulate Josh as he crossed the line, visibly ecstatic at the continued rise of his protegee.

“Ratboy rules!” exclaimed Peaty. “It was another great event at Windham, and my bike was rad. I’m just gutted to be leaving without a decent result, but this place has always had mixed emotions for me over the years!”

The Syndicate are now amped for the final round of the World Cup in Me?ribel (FRA) set for August 21-23. Will Ratboy be able to retain his lead and take his first World Cup title? The whole mountain biking World will be tuning in live to find out! 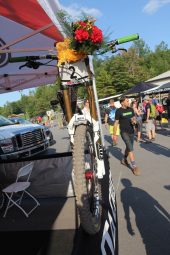 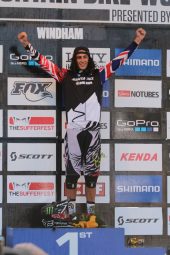 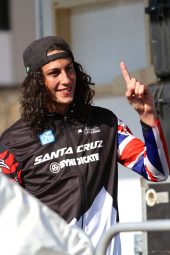 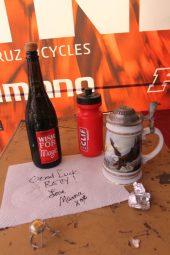 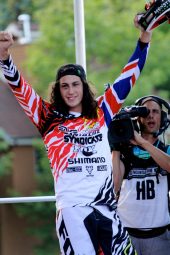 Another amazing weekend of racing with Mike Jones sixth, Sam Hill seventh and Joe Smith ninth. All three riders less than 0.6 of a second off the podium.

It was going to be hard to top last week’s result with Sam Hill winning in MSA, but this week’s team achievement came close with young Mike Jones in sixth, Sam Hill seventh and Joe Smith ninth, all three riders less than 0.6 of a second off the podium. The racing was that close!

Team Manager Nigel Page gives us his take on the weekend’s racing:

The track in Windham is quite a bit different than last week’s track in MSA. Windham is fast, gnarly and short. You have to be at 110% from the start gate to the finish line, hit every line perfect and be off the brakes. It made for an amazing race with all the riders pushing beyond the limits of speed on a downhill bike.

The times were super close all weekend through timed practice, qualifications and finals. It was always going to be a close race.

With all our riders safely through to Saturday’s finals it was some last minute practice runs on Saturday morning to try and find some extra seconds. All three riders were looking super-fast every run. This is not a favourite course for Sam as it’s so short and pretty much flat out one line, but he worked hard all weekend. The first straight which is flat and rocky was always going to be a slight disadvantage for Sam and Joe on flat pedals, but the rest of the track was fine.

As the men’s finals got underway some riders were posting some super quick times, then it was Joe Smith out of the gate. Joe looked amazing on the big screen and the first split time showed green and he was the fastest so far, he then looked faster and faster as he descended the track with a bigger lead at split two but we are still talking a fraction of a second. Joe held it together to the end and went into the hot seat with a blistering time of 2.28.194. Joe was straight onto the top step of the hot seat for quite a while, until team mate ‘Mad’ Mike Jones was on track. Mike set a super quick first split which ended up being the fourth fastest of the race and looked strong and pinned all the way to the end, posting a time of 2.27.734 knocking Joe down to second. For a while that’s how it stayed with our two riders sat in first and second.

Then it was time for Sam Hill. Sam looked super quick also hitting all his lines and looked fast and smooth. But Sam was down on Mike’s first and second splits but then did a super quick last split where you could tell he was getting angry. Sam crossed the line in 2.27.921, just 0.1 of a second slower than his team mate Mike Jones. This showed what an amazing ride young Mike had just put down.

In the end we ended up with Mike in sixth, one position off the podium by a cat’s whisker. An absolutely amazing achievement in Mike’s first elite season (Mike’s been robbed not having a place on the Worlds team in Norway).

Sam Hill ended up seventh for the day (now with six out of six top ten finishes this season and fourth overall) and finally Joe Smith achieved what we all know he is capable of with a ninth place – I’m so happy for Joe, well done fella. Mike and Joe were actually fourth and fifth (podium positions) until the last 23 seconds of the race. Crazy!

It was a great achievement by the whole team to all be in the top 10, especially on a track this close and be the number one team for the race. Well done to everyone involved in our team and all our great sponsors for the support and the belief in us. Bring on the World Cup finals in Meribel in two weeks’ time; it’s going to get wild!

In an exciting and closely fought round 6 of the UCI Mountain Bike World Cup in Windham, USA, Trek World Racing’s Brook MacDonald made his 2nd appearance on the 2014 World Cup podium with a 5th place ride on the fast, rocky and short track. His podium ride also marked the 40th World Cup podium for the Trek Session since the team started; the most successful downhill bike in recent history.

Fellow Kiwi George Brannigan also had a great ride improving on his qualifier to move into the top 10, landing a solid 8th place. The result good enough to launch him into 17th overall giving him protected rider status going into the next round in France.

Local hero Neko Mulally was on a flyer of a run, 3rd fastest at the 1st split and destined for the podium, when unfortunately his front wheel washed out in a blown out berm, and he went down. Amazingly he salvaged the run, finishing with enough points in 25th to move up in the overall standings to 9th.

Greg Williamson also moved up 5 places in the overall standings after his steady ride to 22nd place. After qualifying in the top 20 he was a little disappointed by his conservative run, but learned a lot from the experience.

Unfortunately for Laurie Greenland, the UCI doesn’t afford protected status for the top 10 juniors and so a puncture in qualifying left him out of the finals on Sunday.

Brook said: “Always stoked to get on the podium and now I have two of these under my belt for the season, my confidence has lifted greatly. I feel great on the bike and can’t wait to lift my level even further coming into the next two big events”.

Neko said: “You have to really lay it on the line with a track line this and I was so happy with how I was riding the final. The crash came out of nowhere and I was on the ground before I knew it, but thankfully with my 3rd place qualifier I’ve earned enough points to improve my overall. Keen to take my current form to France for the finals”.

George said: “I had a lot of fun on my run, this track is pretty wild and you have to push it to get a result. Really happy to get protected status and to know I’m riding at a great level at this end of the season”.

Only one week after the World Cup in MSA, Guillaume Cauvin and Tracey Hannah were both together in Windham, USA to compete in the 6th round of the UCI World Cup. The track there is really short and SO fast, it only took the best men 2.25min to get down to the bottom. But the conditions were loose and dry and Tracey was loving it! After getting an excellent 3rd place in qualifying, she continued onto getting a 3rd in the finals too, just behind Atherton and Ragot, who took the win. This is Tracey’s 4th World Cup podium this year and she has managed to move up into 4th place in the overall! Well done Tracey!!

Guillaume had a rough weekend as we couldn’t get to grips with the track. His qualifying run was not what he expected but he still got through in 56th. In the finals he managed to up his pace but still wasn’t satisfied with the way he was riding. He still managed 27th on this very close track which is still a good solid result for him.

Tracey and Guillaume are traveling over to Crankworx Whistler! Lets hope they can get on the podiums as much as possible!!