Cam Zink will be attempting a world record for the longest dirt-to-dirt mountain bike backflip, soaring 100 feet in the air. The event is set to take place at Mammoth Mountain on August 21 and will air live on ESPN.

Mammoth Lakes, Calif. – Mountain Biker Cam Zink is known for going big, but no one, Zink included, has ever tried to go this big. On August 21st Zink will look to make history live on ESPN’s “World of X Games: Mammoth Flip with Cam Zink presented by Monster Energy” as he attempts to land a Guinness World Record for the Longest dirt-to-dirt mountain bike backflip. 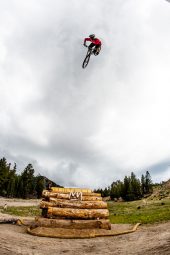 The attempt will take place at Mammoth Mountain’s Canyon lodge using a setup designed by Zink and built up by Mammoth Mountain’s Bike Park team. Zink is expected to hit speeds of up to 45 MPH before launching off a 15-foot high kicker, soaring 100 feet in the air (well past the current record of 78-feet) and landing on a 25-foot high landing/runout.

“This event gives us an opportunity to really shine a bright light on our sport,” said Zink. “Every day guys are doing things on mountain bikes that just defy what we thought was possible. It’s one of the fastest growing sports in the U.S. and hopefully the world-record attempt will give the sport some exposure and inspire the next generation of riders to dream big.”

“Mammoth Flip with Cam Zink presented by Monster Energy” will air live on ESPN on August 21 at 9:30 p.m. ET and on “World of X Games” on ABC, Sunday, August 24 at 2 p.m. ET. The world-record attempt was conceived as part of the “World of X Games” series, which features a variety of X Games and action sports athlete-focused content. For the most updated schedule and information on World of X Games, go to www.xgames.com.

“The X Games brand has always been synonymous with amazing athletic accomplishment and Cam’s world-record backflip will be next,” said Tim Reed, ESPN X Games Senior Director, Events & Content. “World of X Games, ESPN and ABC will provide a tremendous platform to showcase the flip that Cam and Monster have developed with the fantastic backdrop of Mammoth Mountain.”

Mammoth Mountain and its 80 miles of single track bike park terrain hold a special place in mountain biking history having hosted the first-ever lift-assisted downhill mountain biking race. It’s a fitting venue for an attempt of this magnitude, especially given Zink’s life-long connection to the Eastern Sierra.

“Mountain biking had progressed so much in the last 20 years, and Mammoth has been an important catalyst of that progression. Our bike park continually pushes the envelope with input from the best riders out there,” said Bill Cockroft, Mammoth Mountain Senior Vice President. “As a Mammoth team athlete Cam is a huge part of that, and we’re thrilled that we get to host and team with ESPN in creating something this epic.”

Spectators can watch this event for free at Canyon Lodge. Festivities kick off at 6:00 p.m. PT with live music from Southern California rockers, Bad Suns. Food and beverage items available for sale.