Downhill racing at Ft. William never disappoints. Check out some of the latest team videos and reports inside.

If you missed the live event, you can re-watch it here along with the full results.

It was another classic Ft. William downhill world cup with thousands upon thousands of enthusiastic fans (and midges) out in full force! This race was significant for Greg Minnaar as it marked his 100th world cup downhill career start. Steve Peat’s 40th birthday is just around the corner so special helmets were painted, sword presentations were made and pit celebrations were had to mark these significant achievements in their careers.

The downhill final was an exciting mix of new and old talent on the podium, which stirred the overall points up. The Syndicate boys had solid results with Greg in 7th, Josh 13th and Steve 28th. While not the target they had hoped for, they were happy to improve on their qualification runs that were marred with punctures.

In the final Josh hit the track and rode the top well and was up at the first two splits by almost two seconds. He hit a big headwind in the last sector that knocked him back about 3 seconds. He said, “I felt I had a top run going, but that headwind was rough.”

After a 12th place qualifier Greg came down early and was in the hotseat with a time of 4:41.89. Six riders came down and successively took about a second out of each other which made a climatic finish with Troy Brosnan taking his first world cup win with a 4:36.58. Greg says, “I felt I was riding well up top and had a bit of a pedal in the woods. I’m happy with my progress with my knee so while I was hoping for a podium here I’m still pleased that my recovery has been strong.”

Steve and Josh got knocked back a few rungs in the overall standings with Josh in 6th overall and Steve in 17th. Greg jumped up a few positions to 8th overall. With the world cup in Leogang next weekend they are hoping to improve their positions and with Greg’s history there he is really hungry for a podium.
SRAM

SRAM X01 DH and RockShox BoXXer decorate the podium in Fort William, Scotland, at the third round of the UCI Downhill World Cup. On a course that has never seen a first time winner, Brosnan firmly staked his name forever in the history books as he took his first ever elite Men’s Downhill victory. Emmeline Ragot would take her first win of the season in the Women’s field.

Two-time Jr. World Downhill Champion, Troy Brosnan has been steadily climbing the ranks of the elite Men’s World Cup field since 2012. Brosnan has become a familiar and common face on the podium but had never stood upon the top step – until now. After a confident and commanding first place in qualifying he would confirm his speed in the finals, becoming the first ever rider to win his first World Cup at Fort William.

CRC Nukeproof rider Sam Hill has been performing well this season and with Jaycee at his side things seem to be going well for Sam Hill as he claimed 2nd place this past weekend.

It has been a tough weekend for the team. You are all aware of Micks injury. There are no further updates to be made as we are waiting for Mick to see a shoulder specialist.

Weather wise, the riders have witnessed the best and the worst of Scottish weather ranging from warm sunny moments, to thick fog, wind and rain. Despite all this, the track is in good condition and rolling pretty fast.

Qualifying on Saturday took place in very windy conditions (practice was even set forward and started at 7.30am in order to try to avoid the afternoon winds).

Tracey Hannah got a good 6th place despite a few mistakes and not managing to be on pace on the top part of the track.
Guillaume had a close call in the same section Mick crashed on. He didn’t crash but lost some time and crossed the line with the 73rd qualifying time. He obviously was disappointed with this but at least he is qualified and has a second chance to show his speed on Sunday finals.

For Fabien Cousinié, bad luck continues in Fort William quali as he gets yet again another mechanical causing him not to qualify. He won’t be racing in Leogang either as he prefers to concentrate on some team management tasks and the enduro event of Roc des Alpes in La Clusaz.

Tracey had a really good run to try to make her way into the top 5. She corrected all her errors from qualifying and pedaled a lot more in the top section of the track. She stayed in the hot seat until Emmeline Ragot came down, beating her time by 13 seconds. Myriam Nicole also slotted infront of Tracey 5 seconds up on her time. All the top English contenters punctured and so Tracey kept hold of her very good 3rd place! A great result for her! It’s her best result in the past 2 years and since her injury so we are all really happy she did so well.

Guillaume was one of the first guys down the mountain after his bad qualifying. Unfortunately he came in too hot in a bend and went off the track. He had to run back up to where he exited the course to avoid being disqualified and therefore lost a lot of time. He finishes the weekend with a 49th place. He will definitively be keen to get himself back into the top 25 next weekend.

Guillaume and Tracey are heading over to Leogang for the 4th round next weekend. 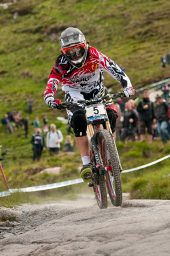 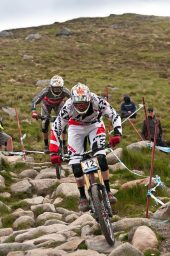 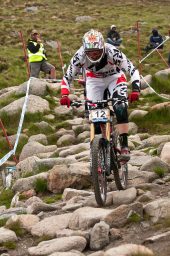 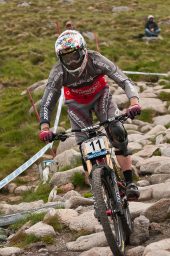 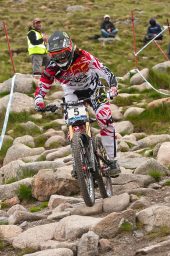 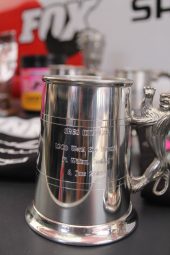 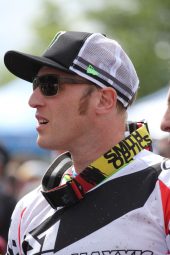 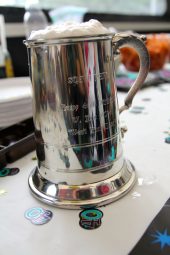 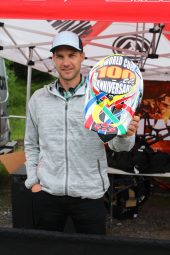 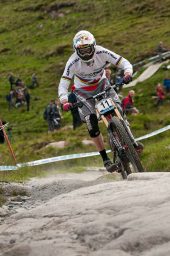 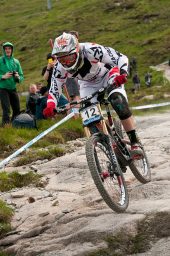 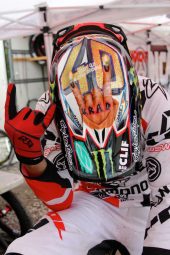