Neko Mulally has been testing out a bigger wheel’d Trek Session in preparation for the 2014 World Cup season. Check out his new carbon downhill 650b/27.5 Trek Session inside.

Pietermaritzburg, South Africa is the first stop for the 2014 UCI World Cup Downhill series.  This track has evolved a bit and it’s an important track to maintain speed on.  Neko’s been testing out the 650b Trek Session for some time now and he’s clearly comfortable on-board it. Some of the benefits being tested on the bigger wheel size is its ability to hold speed, traction, bump absorption, and stability. As with any benefit there are tradeoffs to contrast against and it seems like we’ll be seeing a lot more of these big wheel bikes pop up.

Neko was at a Windrock ride/race this past weekend and we snapped a few pictures along with some details on his new b650b downhill bike. He’s been running the large that you see here but has plans to swap to an XL. Geometry wise the bike comes with the following approximate measurements 48″ (1219.19mm) wheelbase, a 17.3750″ (441.325mm) chainstay and a 14.3125″ (363.5mm) bottom bracket height.  The suspension uses their ABP technology.

The Trek World Racing Team uses the Shimano Saint components. The Saint brakes provide them with lots of stopping power and the Saint drivetrain is quite stable with their clutch mechanism to reduce excess chain movement. Neko has locked out his top cassette gear to reduce the chain length.

A lot of riders have been using power meters to improve their results. Neko had an SRM power meter set up on his bike and this helps him train smarter. This helps give him a better chance at doing well by monitoring this data.

Tire wise Neko had some prototype 650b 2.35″ Bontrager G4 tires on his bike which are roughly sized similarly to a 2.5 Maxxis Minion DHF in comparison.  He will have a selection to choose from by the time Pietermartizburg comes along including 2.3/2.5 Bontrager G5 tires.  The tires will be siped most likely to improve rolling speeds for South Africa. The team currently runs a pretty lightweight wheelset with tubes.  As the duster rims are so light they help them keep rotational weight down but they’re easier to ding but won’t flat as easily. There was plenty of clearance for the tires and the linkage also has the Mino link chips that rotate to give some adjustable geometry.

Neko mentioned that the South African track changed enough that they decided not to run a dropper post last year. With the changes they made, there wasn’t as many areas to benefit from an adjustable seat post.  Neko also had a small timer on his handlebar that is within thumb’s reach.

The front triangle has some clean fork bumpers that double as a cable guide if the cables are ran externally. Neko was using the internal cable routing on his bike.

You can see additional shots of Neko’s bike in the gallery below. More details on the Trek World Racing team can be seen at www.trekworldracing.com 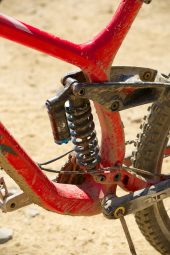