It was a big weekend for Utah this past weekend with both the Red Bull Rampage in Virgin and Outerbike in Moab on the schedule. I have to admit, I was awfully tempted to head to Rampage. It is, without question, the most significant big mountain contest on the FMB tour. But in the end, riding bikes usually wins out over watching other people ride bikes so, I headed to Outerbike. Outerbike doesn’t mean just riding bikes. It means riding all of the latest bikes from a laundry list of top manufactuers along with a few hundred of your best riding buddies on some of the best trails in the world. I overheard riders and manufactures alike talking about how this was the best event of the year for them. 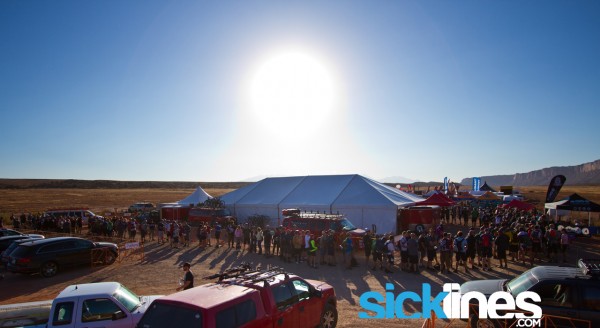 The weather this year really couldn’t have been better. Mild temps and lots of sun made for three great days of riding. The vibe at was over the top with most riders absolutely stoked to hop from dream bike to dream bike all day long. Riders have the option of riding directly from the demo tents on to a network of trails or hopping on a shuttle to one of the longer rides. Ride long trails on one or two bikes or ride short trails on a dozen bikes, it’s up to you. No matter your persuasion, 26’ers, 29’ers, or 650b, carbon, aluminum, or steel, it was all here, all decked out with sweet components and ready for you to give it a serious shake down. There’s really nothing else like this event. 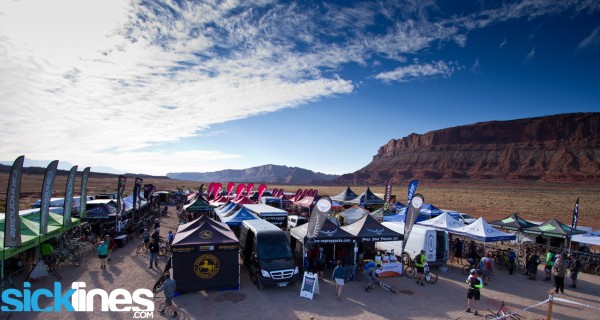 Turner had a full size run of 650b Burners on hand for folks to try out and David Turner himself was there and carefully listening to rider feedback. I took a quick lap on a Burner and walked away intrigued but with as many questions as answers. The overall geometry felt right in the ball park, pedaling efficiency was excellent as expected, there were no glaring issues. That said, the Revelation felt a bit out-gunned and left me wanting to try one with a Fox 34. Perhaps more significant, the Kenda Nevegals were hard to get along with as they rolled slow and felt unpredictable in hard cornering. I suspect that with a better setup, Turner has a really nice trail bike option here, but much more investigation is certainly needed before any verdict can be delivered. 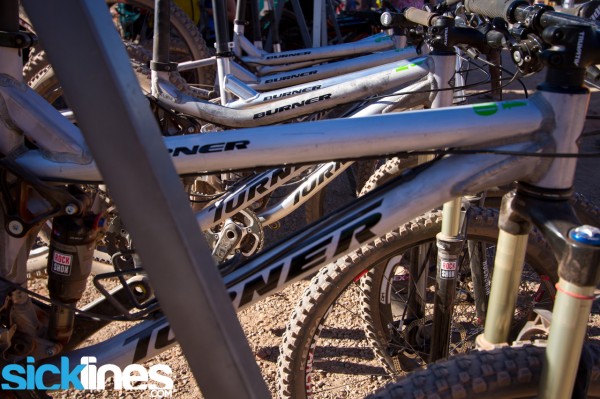 Brian at Cannondale putting on pedals like a Boss! The Cannondale tent was stacked full of bikes and these guys were going the extra mile to make sure your test ride was dialed. 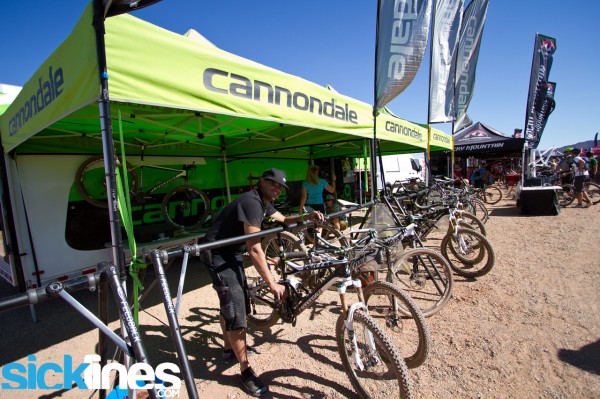 The Intense tent was just mobbed for all three days with the Tracer 27.5, and Carbine 27.5 being next to impossible to get a hold of. These guys have sure created quite a stir with both their mid-sized wheel platform and their new Spider 29 Comp. The waiting line ran 20 to 25 deep each morning at the Intense booth. 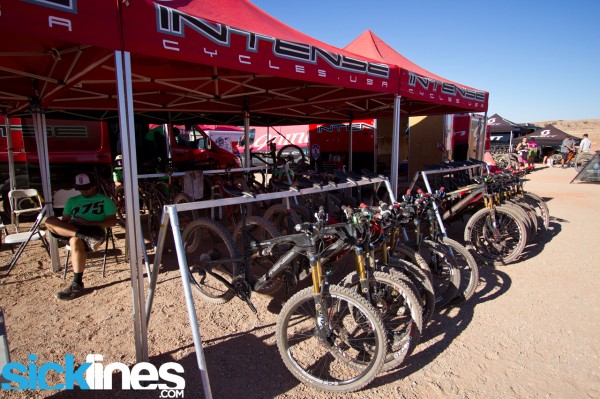 Best mustache award clearly belongs to Aaron Brown of Niner bikes. This shot was snapped in a rare moment of down time for the Niner crew as their booth was consistently one of the busier spots during the event. Not surprising considering that big wheels are particularly well suited for Moab’s desert terrain. 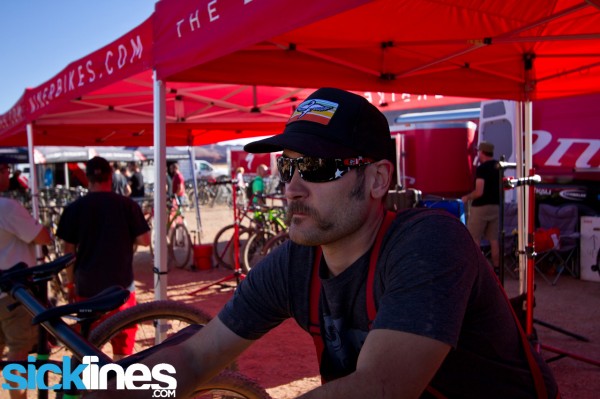 Devinci had a few of their new carbon bikes on hand. I took the Dixon Carbon out for a nice long ride and walked away rather impressed. Frame stiffness was excellent, handling and rider position were spot on, and the rather dampened ride characteristic that carbon is known for felt great on the rocky Moab trails. The shock tune on this bike seemed to do an excellent job at holding the Dixon up in its travel while never feeling harsh as compared to the alloy version of the Dixon that I rode last year. Overall the Dixon Carbon effectively mixes DH style handling with pedal-all-day efficiency. I suspect there will be a lot of happy new owners of this bike soon. Devinci also revamped their long travel Wilson in a similar carbon outfit for 2013. 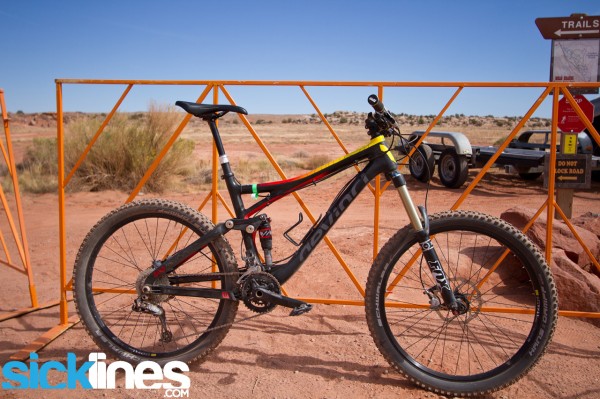 Pivot showed up with a ton of bikes including the new Mach 429 Carbon. Many manufacturers have significantly increased the number of bikes they bring to Outerbike over the past two years. While many people chose to stand in line an hour or more before opening each morning, I had no problem finding very desirable bikes to ride throughout each day. 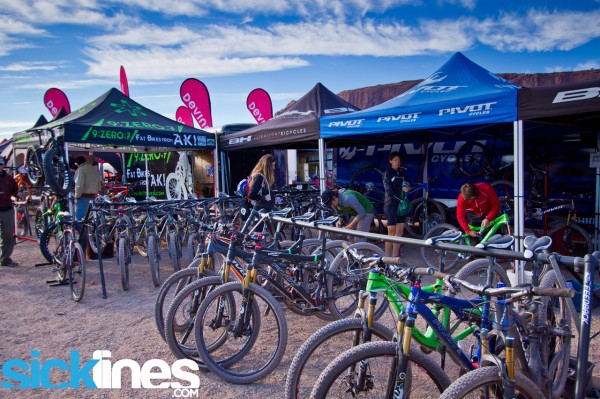 The carbon Specialized StumpJumper FSR Expert Evo 26 was one of my favorite bikes of the show. Sporting 150mm of travel , it’s got mostly everything a DH’er dreams of in a trail bike. Almost all of the details are bang on with a low, slack stance, ISCG 05 tabs and a chain guide, dropper post, and a fully built weight of right around 28 lbs. My only real qualm was with the Command Post Blacklite which gives up quite a bit to the smooth action of the Reverb and KS dropper posts. I took this bike down one of the longer trail rides and was equally impressed with both it’s pedaling characteristics and it’s nimble handling. 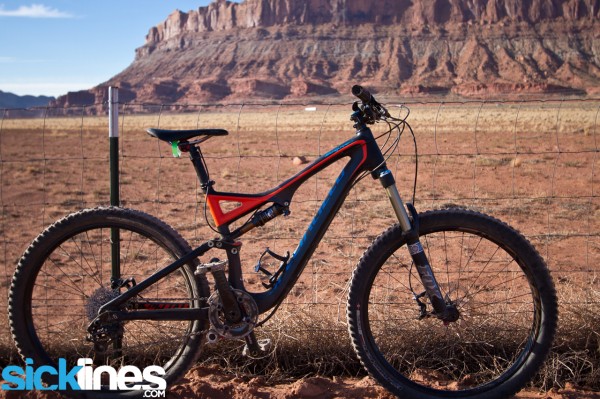 Brad Pastir sets up suspension on a demo Specialized Saphire. Outerbike riders benefit not only from having many bikes to try but also in being able to test bikes that are correctly setup for them. Many manufacturers went the extra mile to swap stems or make other small adjustments to get things running just right. There were a few a few outliers still showing up with weird setups such as long stems and narrow bars on their AM machines but thankfully that trend is quickly fading away. 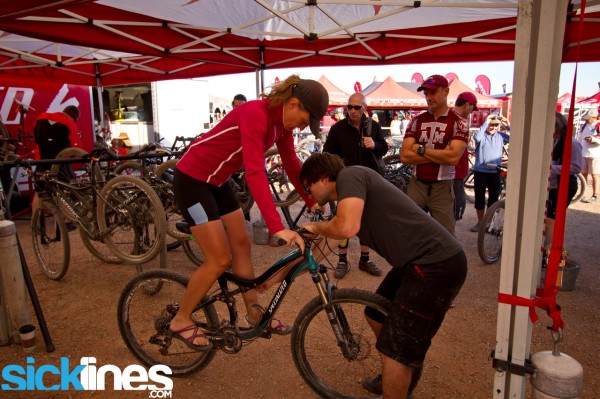 Sombrio had their custom portable pump track by Progressive Bike Ramps setup for folks to ride. Old guys, little guys, and shredders in their prime all shared the track which was conveniently located right next to the afternoon beer garden. Yes, pump track and free beer. If you weren’t at Outerbike last weekend, you missed out. 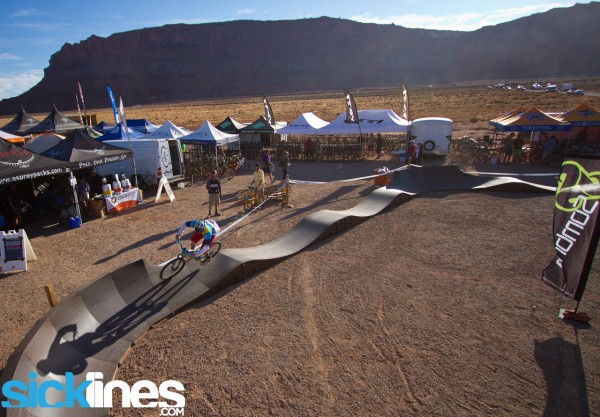 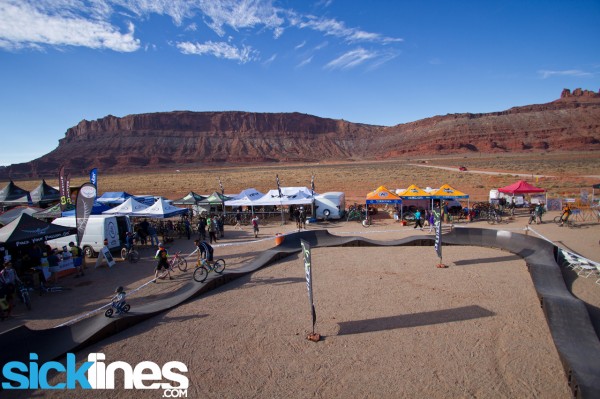 Make sure you make plans to attend Outerbike next year! It’s a rare chance that consumers are given the chance at a demo this big, let alone the experience.

On Dutch Ground – Riding The Netherlands

Our Tour de France” by COMMENCAL & SHIMANO with Kilian Bron