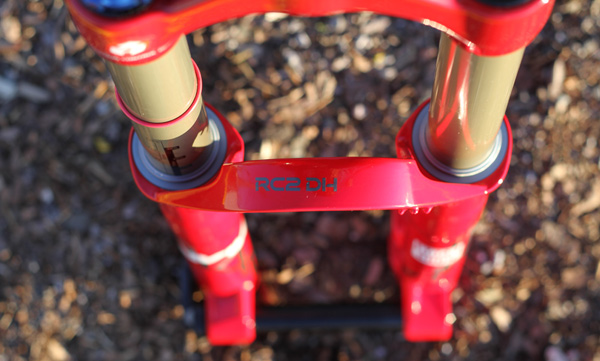 The Lyrik has been a favorite amongst riders for some time now. For 2012 it gets a  few tweaks making it an even more solid choice for trail riders and all mountain bikes.

RockShox sent through this vibrant red Lyrik RC2 DH 170mm fork to us to check out.  While you can’t purchase it in this same color, they offer the Lyrik lineup it in Black, White, or Diffusion Black. The RC2 DH Solo Air model is only available in White this year however.

We’ve checked out the 2010 Lyrik as well in the past and the 2012 Lyrik lineup shows some very nice improvements.  Out of the box the fork had smooth actuation, discernible audible clicks in the compression and rebound adjustments, and was ready to roll.

Key updates to the 2012 lineup would primarily in our opinion be the revisions to the air system on the Lyrik. The previous oil-based 2-Step fork option changes to an air only Dual Position Air system for improved reliability.

Naming convention on the Lyrik series has also been simplified a bit to quickly discern the external adjustments through R(rebound), C(compression), C2(Compression hi & low), and L(lockout).

Power Bulge
Material reinforcement in the lower leg at the bushing increases stiffness and bushing durability. 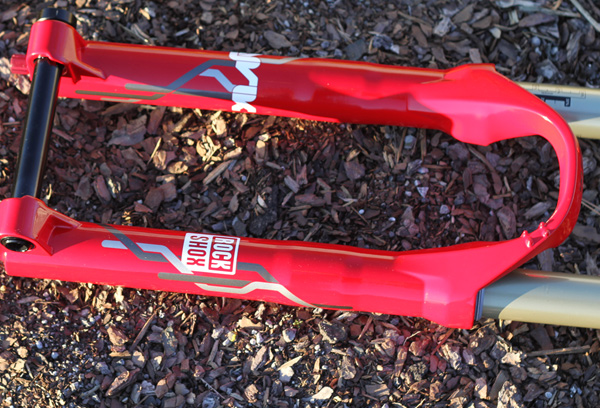 Travel Gradients
Measurement gradients indicating the current travel setting are conveniently located on the upper tubes so that you always know how much sag you are running. Located on the front and back of the stanchion. 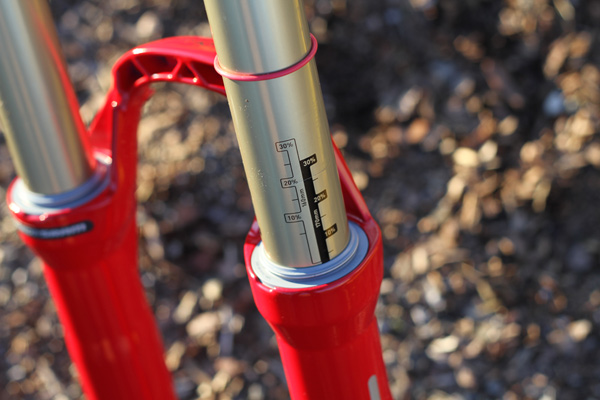 Allows for quick removal of the 20mm axle without any tools. 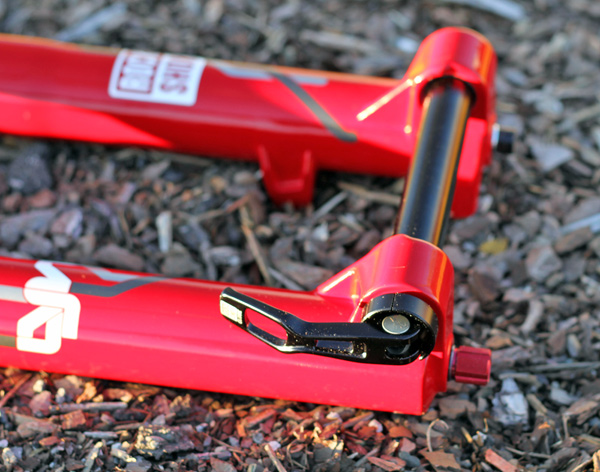 Weight:
SRAM claimed a weight of 2180g for the Lyrik RC2 DH Solo Air and we verified ours uncut at 2181.1g. You can see the other Lyrik models claimed weights in the specifications list. 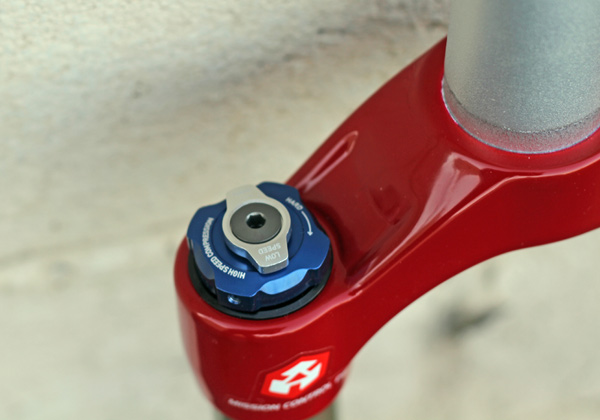 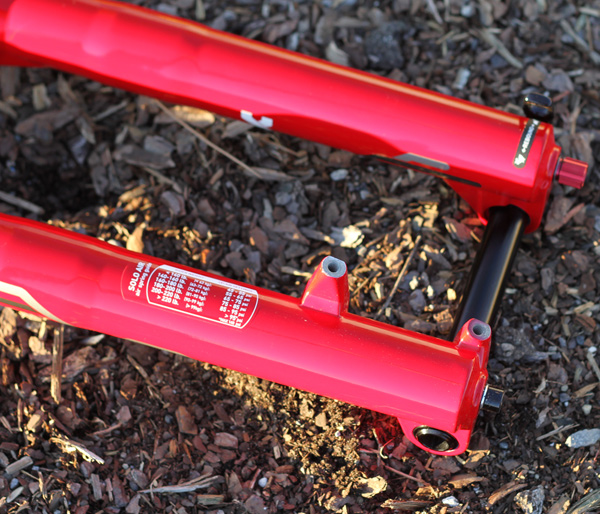 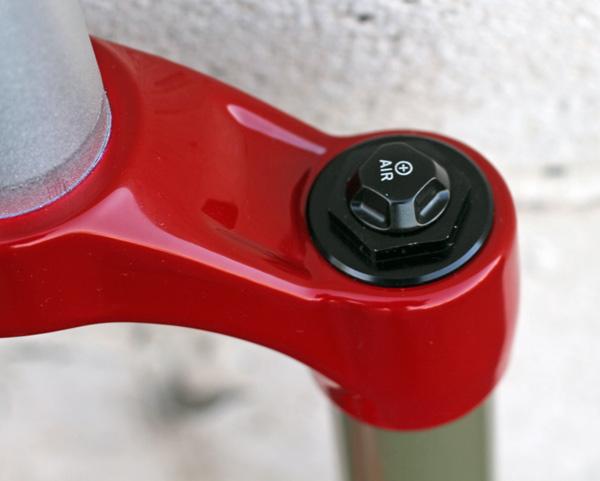 Out of the box our damper knobs were a bit firm, but loosened up after a few turns.  It would be nice if the knob break in was done before we received the fork as it makes for a better experience for the end consumer. It would reflect a bit nicer on the investment and the end product as a whole.

We asked SRAM about the differences between the standard Mission Control and the Mission Control DH to get a better idea their design philosophy. They provided with a lot of backstory on the development of the damper and explains why they offer both options for riders to choose.

When we originally designed the Lyrik we loved the idea of having an efficiency feature in the damper.  The team designed in the pop-up Flood Gate button that allowed you to toggle between your favorite performance setting and a more pedaling friendly mode.  As we started living with Lyrik and riding it we found that not everyone used that feature. Specifically while riding here in Colorado, none of us were even using that feature.  A few of us at the shop decided to pull out the floodgate feature, which sits directly in front of the compression circuits.  When we did that we had to re-shim the compression piston because there was more oil flowing straight to the shim stack.  The guys here in the shop fell in love with bump performance of this tune.  This new set up reduced the systems harshness on big hits.  At the time we just kept running that system in our personal forks.  We talked about putting it into production, but couldn’t justify all the work against other projects we had going on.  – Jeremiah Boobar

When the MY10 BoXXer project kicked off, it needed a new compression piston design that fit into the same size upper tube as a Lyrik.  Since all the work was already being done on the BoXXer side of things we could just plug in the Lyrik and get this fork we’ve all been riding into production.  The production version is dramatically more refined than the proto system we had been riding on.  The new compression piston was focused on increasing the oil flow across the piston allowing us to control more of the compression load with the shim stack.  This boils down to a controlled compression feel, without harshness and smooth transitions between high and low speed compression circuits. So, why do we have both systems still?  A lot of users out there love the Flood Gate feature and use it on every ride.  But, for those out there who don’t use that feature, the Mission Control DH provides superior bump performance.  It really is a pretty big difference. – Jeremiah Boobar 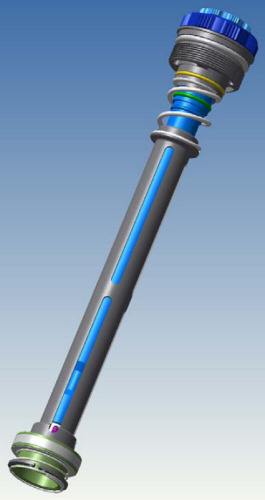 “There are a few parallels between the two systems, but really they were developed independently.  We use the same compression piston, but the valving is different.  The new Lyrik uses a larger rebound shaft than the original, but it isn’t as large as the massive 19mm shaft on BoXXer.  Lyrik does not have enough room in the upper tube to accommodate as much displacement at the BoXXer.  The Lyrik rebound shaft is as large as we could make it without coming up short on travel.  Both compression tunes were tested on the types of bikes with the types of riders who would be really using the product.  If we just took the BoXXer compression tune and applied it to the Lyrik the Lyrik would feel horrible and vise versa. The Lyrik and BoXXer were both designed by the same team, but each project was run by a different designer.  In the teams weekly meeting, the designers shared what they were learning from their test riders and sharing ideas to see what would make the best product tune for each application.  This is one of the huge benefits to having a design team that is focused on long travel suspension.” – Jeremiah Boobar

Both of the Mission Control forks (DH and Standard) have these updated rebound circuits that feature a larger displacement shaft and the removal of an internal tube, so a larger rebound piston can be utilized. The Dual Flow rebound incorporates independent damping circuits allowing separate rebound speeds for big hits and small ones. The adjustable rebound is the beginning-stroke (small hit) rebound while the ending-stroke (big hit) is factory set. We suspect this change is just as important as the updated Mission Control (DH) cartridge as it helps push more oil in the circuit and offer the end user a more controlled ride in all situations.

Visit your local dealer to purchase or check out Fanatik Bike