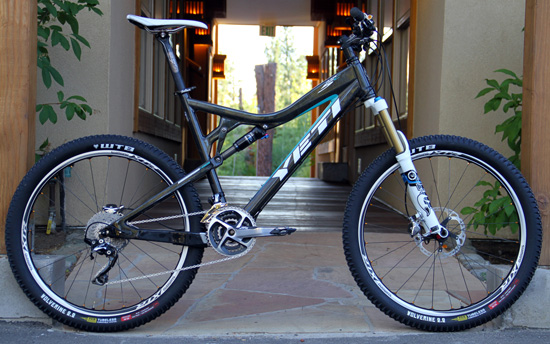 On its fifth generation already, Shimano XTR is a staple to the Shimano brand.  Shimano has invited us to check out their new XTR M980 components at Downieville, CA.  Inside is an introduction to some of the M980 components as well as some first impressions on the new XTR parts.

The new Shimano XTR is rider tuned of sorts as a rider can pick and choose various XTR components to deliver the performance they’re after.  No matter if you’re looking for a high end XC race bike setup, or a more Trail / All Mountain setup, Shimano’s new XTR M980 offers riders options.  Most every part is available in the two flavors (XC / Trail) that you can mix and match to tune your M980 setup to your needs and wants in a gruppo. 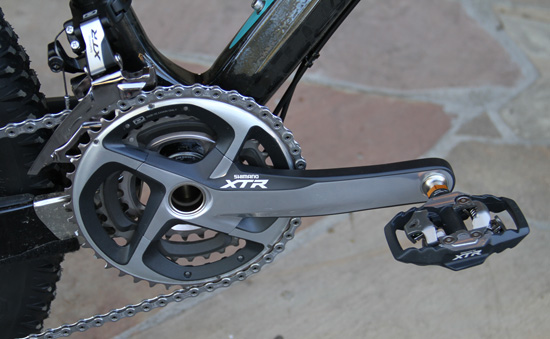 Up front, Shimano is offering their XTR cranks in a double or triple setup.  As seen here, the granny ring is 24t, 32t middle, and a 42t big ring.  This is their more trail oriented setup as it offers a bigger range of gears than the double setup does.  This gives users some options when it comes to picking their ideal gear range.  Shifting is smooth up front with shift ramps assisting effortless actuation.  There are plenty of other crankset options available to tune your ride.  One thing to keep in mind with these new 2×10 setups is compatibility with chainguides and bashguards as they don’t seem to be setup just yet to deal with these setups.  Shimano’s XTR M980 crankset isn’t really designed for this type of usage, but inevitably people will want to do this so its worth mentioning.

update – The tripple M980 setup as seen here can be adapted to run a bash ring by removing the big ring and using a 104 bcd bash ring.  This should be what those looking to run a double and bash setup should run instead of the dedicated 2×10 crankset. 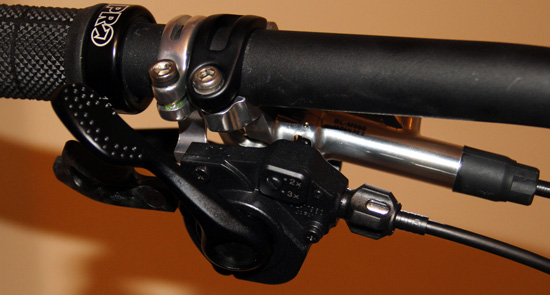 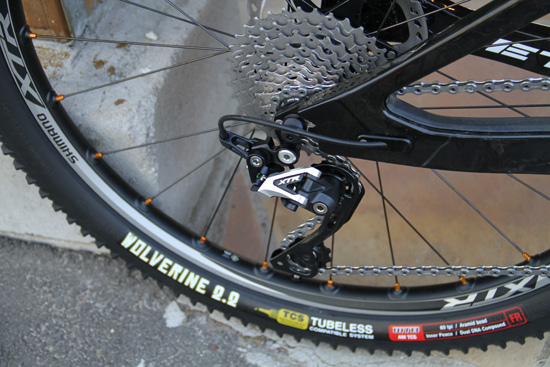 In the rear, the XTR rear derailleur comes in medium or long cage (as seen here).  The cassette show here is the 11-36t cassette.  The 36t cassette is perfect for those guys who may want to run a 1×10 or 2×10 in my opinion.  It lets you get away with a bigger ring up front and gives the bike some additional climb-ability without shifting the front chainring that a 11-34 can’t offer.

The 10 speed mtb specific chain is pretty impressive and shifting so far has been pretty impressive as the ramped edges allow the chain to traverse the cassette easier.  Under loads or when things turn dirty this should prove to be a nice addition to making XTR shift even smoother. The 2011 Dynasys XT/SLX 10spd lineup utilize similar new chains as well that offer improvements here as well. 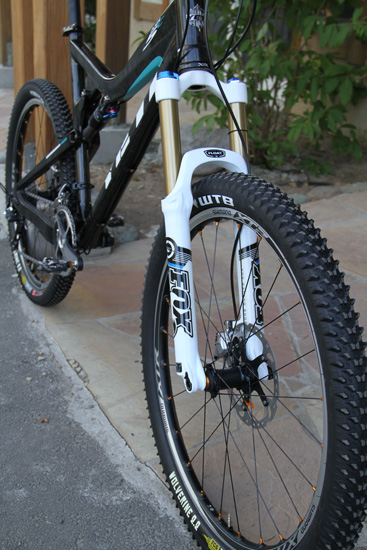 Up front is a new 2011 FOX Float 150mm with a 15QR axle.  Adjustments are very easy to make on the fly with this fork and FOX continues to make improvements in their fork lineup that can be felt each year. 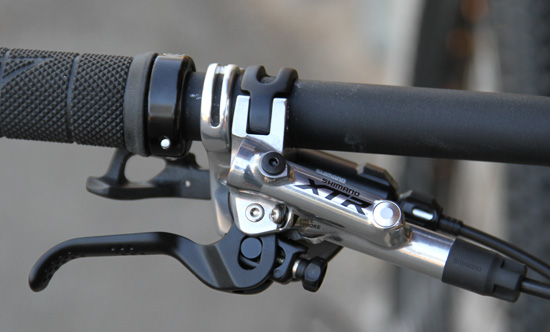 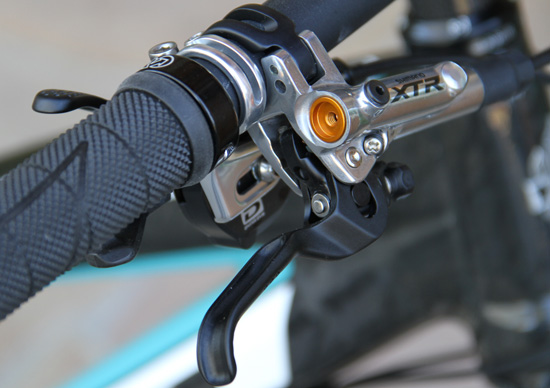 The brakes come in two flavors, Trail and XC. This new M980 caliper has bigger pistons as well as revised hydraulic layout to improve bleeding and power management as well as ceramic pistons.

Shown here is the Trail version that offer a bit more power as well as finned brake pads. The brakes also feature a two piece clamp that allow you to install the brakes (or remove them) without the need to remove all your controls.  Additionally the upper hole that you can see in the brake lever picture above proves some security as you have to press a release into the inside of this hole to allow the clamp to fully disengage from the handlebar. 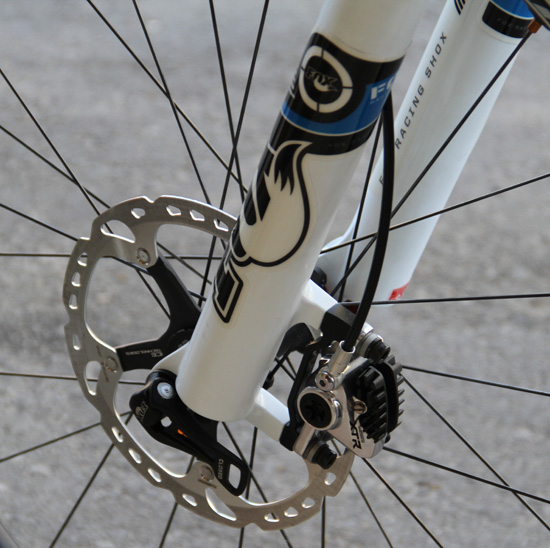 The finned ICE-tech brake pads are supposed to assist in keeping things cool.  The XTR rotor is new as well and features as well ICE technology.  The rotor has a sandwiched aluminum / steel setup that is designed to aid in cooling and keeping braking working optimally.  Ice-Tec brake pads have been provided with an aluminum radiator fin with a stainless steel two layer back plate structure. Ice-Tec rotors have an aluminum core sandwiched in stainless steel for improved heat dissipation.Time will tell how well this works and stays clean in extreme conditions but so far the XTR Trail brakes pack a ton of power compared to older XTR brakes. 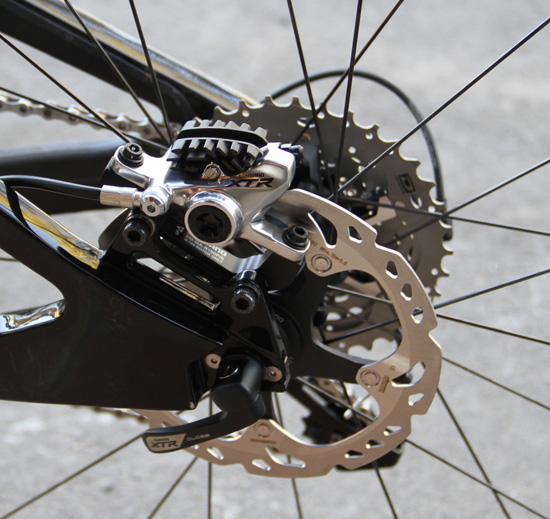 The brake hose is also redesigned and takes some queues from the Saint high pressure hose but improves upon it as well to help deliver more power to the brake system.  XTR also has new lighter brake adapters as well as some refined bolts to shave some additional weight. 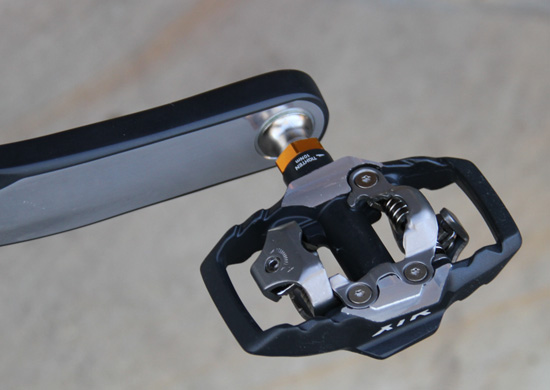 These pedals are available in two options as well, XC and Trail.  Here you see the XTR M985 Trail pedals that offer a bit more room to secure your foot compared to typical SPD pedals.  It helps give a bit more surface area and room to rest your foot on when you aren’t clipped in fully.

Check back for more later as I get more time on this impressively light, yet powerful components.  IF you’re looking to read more on the XTR M980 setup, check out our initial post on it to read up on some of the details on the new Trail and XC XTR M980 components.