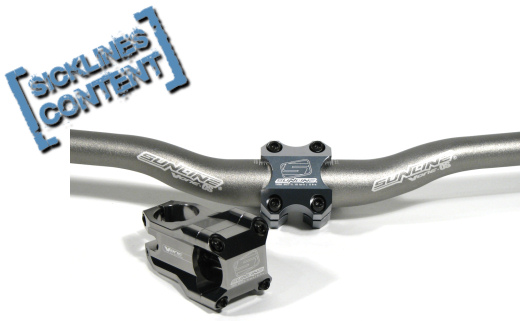 Sunline came on to the scene last year and they’ve been putting in a good bit of work to get their products out there and be competitive. You can see Sunline parts on the Animal-Commencal team as well as many other teams and athletes like Duncan Riffle.

Inside we’ve got Sunline’s 2008 V-One bars that are upgraded this year to over 29″, their integrated Boxxer stem, and their all-mountain stem that Jason was kind enough to send over for us to check out.

The Sunline V-One oversized bar this year grew a good bit. It’s now over 29″ (744mm) and weighs in at 309g. The finish on it is unique and has a good silver tone to it. The bar has clear markings for cutting it down if you’d like and a smooth surface for clamping parts to.

The Boxxer stem bolts directly onto the Boxxer crown (2005 and newer). The nice thing about direct mount stems is that your bars won’t twist in a crash and it provides a really solid interface to control your bike even more. The Sunline Boxxer stem is also very low. It’s lower than the e13 direct mount stem for reference.

It’s currently one of the lightest Boxxer direct mount stems too at 171g. Both of the Sunline stems we received had some small nicks in them and the edges are a bit sharper than I’d like. The Boxxer stem had a blemish most likely due to the part being dropped along the line somewhere or banging an object along the way. 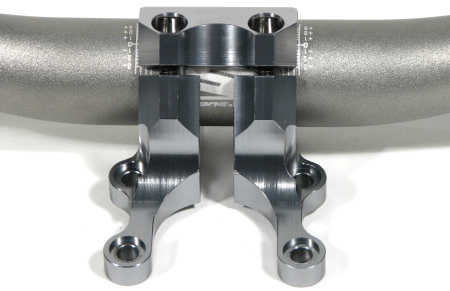 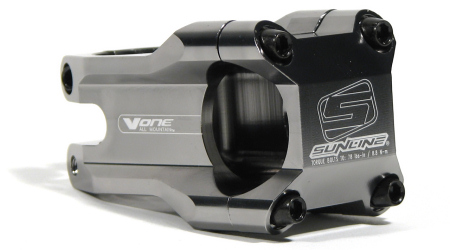 The 31.8mm 50mm All Mountain stem was very light. It weighed in at a scant 147g. The finish looks nice on the stem as well and has a machined look to it. The stack height was very low at 35mm where most other stems like the Thomson come in at 40mm allowing you do get your bars just a little bit lower if desired.

The stem was also machined out a whole lot but still maintains ample stiffness. The edges on this stem were also a bit sharper than I’d like but they’re not that bad. Like the Boxxer stem, this stem had a blemish on it. It had a nick on the bottom of the stem that was most likely due to the part being dropped along the line somewhere or banging an object along the way. 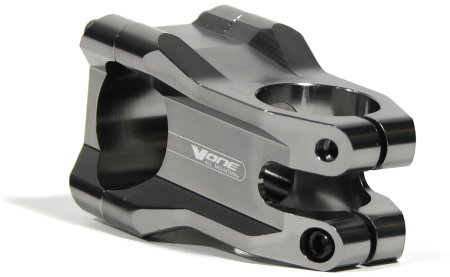 Don’t forget to check out the gallery for lots more pictures of the stems and handlebar. You can purchase these products directly on SixSixOne’s website for a really competitive price. Sunline has some solid ideas they’ve implemented in their product line and are well worth considering when you look to upgrade or build your bike. The weight of the Sunline products is low and stiffness is also quite good. They could, however, improve a little bit on the final products finish and edges on the samples we received just a little bit better.
Check out the full range of Sunline gear at http://www.sixsixone.com